If the term “hydro-fracturing” or simply “fracking” is not already familiar to you, gentle reader, then you are missing one of the significant economic developments in our lifetimes.

This new technology for using water, sand, and chemicals to fracture shale formations deep in the ground is releasing enormous quantities of natural gas from unexpected parts of the country.  The production of onshore natural-gas in the United States has increased about 50% over the past five years, while the price has fallen more than half,  from $8 to under $3 per million British Thermal Units (the standard unit for natural gas purchases). 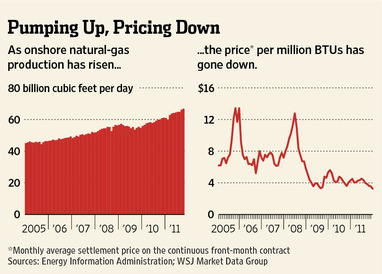 What does this mean?  More than half of American households (who use gas to heat their homes) can expect to save hundreds of dollars as the cost of staying warm is forecasted to fall by about 20%.  Steel companies and plastic makers are building new facilities in the United States (think jobs…) so they can take advantage of the inexpensive fuel to compete globally.  More natural gas power plants also means cleaner air for everyone.  Of course, many companies are earning increasing profits from drilling wells.

It also means that we are better obeying the creation mandate (Genesis 1:28) to subdue the earth and make it useful for human beings.  Therefore, the newly developed “fracking” techniques seem to be fundamentally good and pleasing to God.  What do you think?