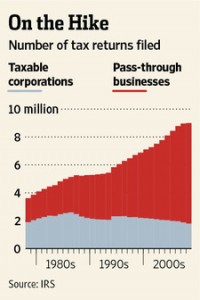 ng nothing in federal income taxes.  Before this trend troubles you, don’t overlook the fact that more people are paying more in personal taxes in the United States.  John McKinnon of the Wall Street Journal reports that the percentage of corporations organized as nontaxable businesses has grown from about 24% in 1986 to about 69% in 2008.  Why is this happening, and what is the effect on the revenues of the federal government?

People invariably respond to incentives, and the tax code favors this trend. The shareholders of corporations in the United States first must pay taxes of 35% income, and then pay a second Federal tax of 15% of all dividend payments.  As a result, the owners of such companies receive only 55 cents out of every dollar of profits while the rest goes to the federal government. 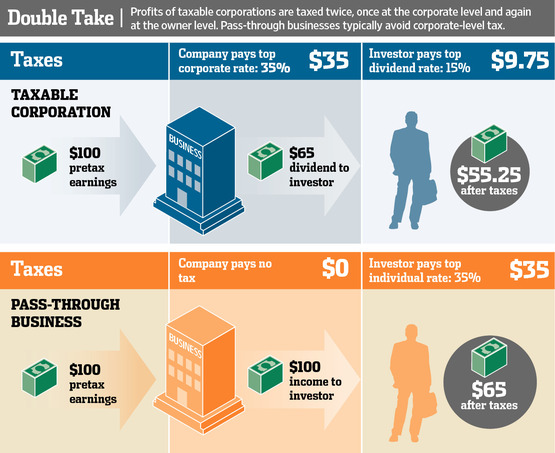 Alternatively, if a corporation is legally organized as a “pass-through business” then the corporation does not pay any federal taxes and the owner pays 35% of all income to the national treasury.  In this case, the owner receives 65 cents out of every dollar of profits.  I needn’t ask, gentle reader, which type of corporation you would prefer to own.  (In the unlikely case that you are the owner of a pass-through business and would like to pay more taxes, feel free to send additional money the Treasury Direct program which receives gifts on behalf of the Federal Government.)

How can the federal government increase the total revenue that it receives in taxes? According to economist Arthur Laffer, reducing the corporate tax rate to 20% (more consistent with the governments around the world) would result in a gusher of revenue. Foreign earnings being held outside of the United States because of the high marginal tax rate would be repatriated by domestic corporations. While the federal government would receive a smaller slice, the radical increase in the size of the pie would benefit the IRS, the corporations, and all of the people who would be employed as a result of the reinvestment in the United States.