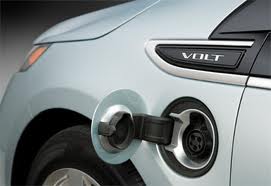 The Chevrolet Volt electric car from GM invariably is mentioned in my economics classes whenever the discussion turns to alternative energies.  It is often held up as the “car of the future” and a paragon of the green economy transforming the United States.  While I would be delighted to see the Volt reach these aspirations, I question whether those who have pinned high hopes on this vehicle have actually considered the data.

Readers of Above All Earthly Powers are encouraged to research the data rather than be swayed by headlines and soundbites.

GM expects sales to fall short of 45,000 Volts this year.  This likely will prove true, given that only 7,600 were sold last year. In other words, of the 12.8 million vehicls sold in the United States last year, 99.95% of them were not Chevy Volts.  It is also safe to assume that essentially 100% of the 18.5 million automobiles sold in China last year were not Chevy Volts.

What could account for this failure to revolutionize the auto industry by this innovative green product? One contributor could be the $41,000 price tag on a vehicle smaller than the Ford Fusion (2011 record sales: 240,000 vehicles).  Of course this steep price is partially offset by a $7,500 government rebate which is coerced from non-green taxpayers who otherwise might not donate to save the planet.  This sales incentive seems reasonable in light of the fact that the federal government still owns 26% of General Motors outstanding common stock.

Another contributor to low sales might be concerns about having batteries of the Volt spark or burst into flame several weeks after being involved in a collision.  Though this happened to three vehicles that were tested by the National Highway Traffic Safety Administration, GM “took unprecedented steps to reassure Volt owners and the public that it was taking the matter seriously.”  Based on engineering fixes, the  NHTSA closed its investigation saying it “found no reason to believe the car poses an unusual risk of fire.”

Gentle reader, we should care about the environment. For this reason, future posts will address how to care for the creation with ideas that keep individuals safe from fires, are cost-effective in light of poverty, and produce actual change rather than “green washed” corporate public relations.

Outsourcing of manufacturing jobs has haunted the economy of the United States for decades, but this trend is now reversing with the increasing productivity of American workers.  The Wall Street Journal reports, “Though the U.S. is hardly a low-wage country, it has become much more efficient, making it more attractive for global manufacturers.”

Manufacturers have used automation and flexible work practices to make 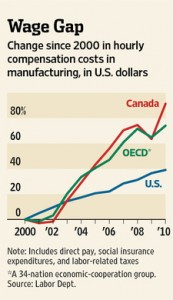 far more goods with the same amount of people.  This increased productivity results from ideas which make the unit labor cost of goods lower without reducing wages to the workers.  The Journal reports that costs in the United States have declined by 13% over last decade compared with increases of up to 18% in Germany, Canada, and South Korea.

The United States also benefits from lower energy costs from the shale-gas boom that is underway (look for posts on this in the near future — DSK). Logistics and transportation are better in the United States than most countries.  Though it goes counter to the prevailing sentiment, manufacturing and United States is growing more attractive to companies around the world.

Do you know someone who is a “nervous flyer”?  Is it dangerous to fly in the United States?  Once again, it is helpful to look at the statistics rather than relying on our personal inclinations.

The Wall Street Journal reported today that there were no fatalities on scheduled U.S. flights in 2011.  In fact, the fatal-crash rate for scheduled carriers is down 80% since the late 1990’s.  A plane crash is always headline news; few papers report, “America’s skies are the safest they have ever been,” according to Transportation Secretary Ray LaHood. 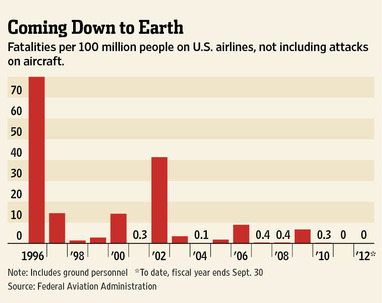 As a result, we can be grateful to God that for the average person the fastest way to travel great distances is also  the safest — likely for the first time in the history of mankind.  This mobility is of inestimable benefit for commerce, recreation, and family ties.  Also, this shows us how our individual views can be biased in the absence of wider statistical information.

In this way economic data — properly interpreted — can help finite individuals better see the world from the perspective of an omniscient God.

Crime in the United States continues to fall, though most people do not recognize this trend.  FBI data in the graphic below from the Wall Street Journal shows the one year trend of major categories.  James Fox, a professor of criminology at Northeaster University in Boston, says people “simply won’t believe” crime is roughly half what it was two decades ago. Partly this is because pockets of lawlessness are still common in some neighborhoods, but more because news and television programming highlights criminal activity.

How do we interpret this information?  First, we can be grateful to God and the police who serve (Romans 13:4) for making this one of the safest societies in the history of mankind. Second, this reminds us of the value of aggregated economic information that can help us overcome biases introduced by our individual perceptions. In the same way, economic data can provide a broader overview to guide wiser decisions.