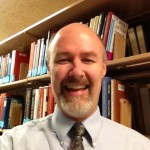 David Kotter serves as the Dean of the School of Theology of Colorado Christian University where he is a Professor of New Testament studies. He formerly taught graduate economics, finance, and global business for Indiana Wesleyan University at the campus in Louisville, Kentucky. Professionally he worked for Ford Motor Company as the finance director of a manufacturing plant in Europe, as a financial analyst at the world headquarters in Michigan, and as a financial advocate for the minority supply base. After attending seminary later in life, he was invited to be one of the founding pastors of CrossWay Community Church and by God’s grace saw the church grow from under eighty people to over eight hundred.